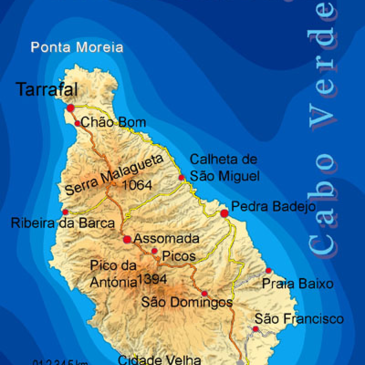 Santiago (Portuguese for “Saint James”), or Santiagu in Cape Verdean Creole, is the largest island of Cape Verde, its most important agricultural centre and home to half the nation’s population.

Santiago is located between the islands of Maio (40 kilometres (25 miles) west) and Fogo (50 kilometres (31 miles) east) and is one of the Sotavento. It was the first of the islands to be settled, the town of Cidade Velha being founded as Ribeira Grande in 1462. It is also home to the nation’s capital city of Praia and to one of the islands’ four international airports, Praia International Airport, 3 kilometres (1.9 miles) from the capital (IATA airport code: RAI, Praia).

Santiago is the largest island of Cape Verde, with an area of 991 square kilometres (383 square miles). The island
is mountainous, although slightly flatter in the southeast. In the area of Cidade Velha and west of Salineiro consists of a plateau that has very few hills and a lot of ravines, several of them deep. As does with many other islands in the country, within a kilometer or two within the island has the area inside the ocean that is 1 kilometer deep, 5 kilometers further is 2 kilometers deep and as far as ten kilometers away is the ocean floor which is about 3500 meters deep. The wetter climate of the interior and the eastern coast contrasts with the drier one in the south/southwest coast. Praia, located in the southeast coast, is the largest city on the island, and also the largest city and capital of the country. Other towns on the island include Cidade Velha, 15 kilometres (9.3 miles) west of Praia, Cape Verde’s first capital; Assomada, 60 kilometres (37 miles) north and Tarrafal in the northern part of the island 75 kilometres (47 miles) from the capital. The island has the most number of villages and settlements in Cape Verde.