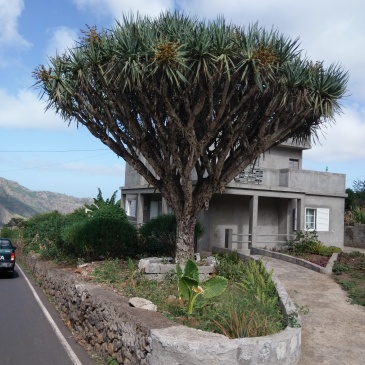 Before the arrival of Europeans, the Cape Verde Islands were uninhabited.[citation needed] The islands of the Cape Verde archipelago were discovered by Genoese and Portuguese navigators around 1456. According to Portuguese official records, the first discoveries were made by Genoa-born António de Noli, who was afterwards appointed governor of Cape Verde by Portuguese King Afonso V. Other navigators mentioned as contributing to discoveries in the Cape Verde archipelago are Diogo Gomes who was with António de Noli and claimed to have been the first to land on and name Santiago island, Diogo Dias, Diogo Afonso and the Italian (Venice-born) Alvise Cadamosto.

In 1462, Portuguese settlers arrived at Santiago and founded a settlement they called Ribeira Grande now called Cidade Velha, to avoid being confused with the town of Ribeira Grande on the Santo Antão island. Ribeira Grande was the first permanent European settlement in the tropics.

In the 16th century, the archipelago prospered from the Atlantic slave trade. Pirates occasionally attacked the Portuguese settlements. Sir Francis Drake, an English corsair privateering under a letter of marque granted by the English crown, twice sacked the (then) capital Ribeira Grande in 1585 when it was a part of the Iberian Union. After a French attack in 1712, the town declined in importance relative to nearby Praia, which became the capital in 1770.

Decline in the slave trade in the 19th century resulted in an economic crisis. Cape Verde’s early prosperity slowly vanished. However, the islands’ position astride mid-Atlantic shipping lanes made Cape Verde an ideal location for re-supplying ships. Because of its excellent harbour, Mindelo (on the island of São Vicente) became an important commercial center during the 19th century. Diplomat Edmund Roberts visited Cape Verde in 1832.

With few natural resources and inadequate sustainable investment from the Portuguese, the citizens grew increasingly discontented with the colonial masters, who nevertheless refused to provide the local authorities with more autonomy. In 1951, Portugal changed Cape Verde’s status from a colony to an overseas province in an attempt to blunt growing nationalism. In 1956, Amílcar Cabral and a group of fellow Cape Verdeans and Guineans organized (in Portuguese Guinea) the clandestine African Party for the Independence of Guinea and Cape Verde (PAIGC).

It demanded improvement in economic, social and political conditions in Cape Verde and Portuguese Guinea and formed the basis of the two nations’ independence movement. Moving its headquarters to Conakry, Guinea in 1960, the PAIGC began an armed rebellion against Portugal in 1961. Acts of sabotage eventually grew into a war in Portuguese Guinea that pitted 10,000 Soviet Bloc-supported PAIGC soldiers against 35,000 Portuguese and African troops.

A budding independence movement — originally led by Amílcar Cabral, assassinated in 1973 — passed on to his half-brother Luís Cabral and culminated in independence for the archipelago in 1975.

Following the April 1974 revolution in Portugal, the PAIGC became an active political movement in Cape Verde. In December 1974, the PAIGC and Portugal signed an agreement providing for a transitional government composed of Portuguese and Cape Verdeans. On 30 June 1975, Cape Verdeans elected a National Assembly which received the instruments of independence from Portugal on 5 July 1975.

In the late 1970s and 1980s, most African countries prohibited South African Airways from overflights but Cape Verde allowed them and became a centre of activity for the airline’s flights to Europe and the United States.

Responding to growing pressure for pluralistic democracy, the PAICV called an emergency congress in February 1990 to discuss proposed constitutional changes to end one-party rule. Opposition groups came together to form the Movement for Democracy (MPD) in Praia in April 1990. Together, they campaigned for the right to contest the presidential election scheduled for December 1990.

A February 1996 presidential election returned President Monteiro to office. Legislative elections in January 2001 returned power to the PAICV, with the PAICV holding 40 of the National Assembly seats, MPD 30, and Party for Democratic Convergence (PCD) and Labour and Solidarity Party (PTS) 1 each. In February 2001, the PAICV-supported presidential candidate Pedro Pires defeated former MPD leader Carlos Veiga by only 13 votes.